Save 35% on a Fun Scavenger Hunt Adventure Use Code: FGCOUPON

35% off. Urban Adventure Quest's Scavenger Hunt Code: FGCOUPON. Turn Your City into a giant game board with this fun scavenger hunt adventure. Combine the excitement of the Amazing Race with…
View 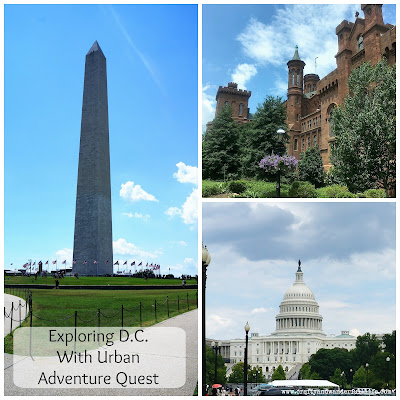 DISCLOSURE:  This is a sponsored post in conjunction with USFamilyGuide.com.  I received a free Urban Adventure Quest scavenger hunt in exchange for a review.  No further compensation was provided.  All opinions are my own.

We don't live very far from Washington, D.C. -- it's about a 45 minute drive from our house to downtown D.C. Yet, we hardly ever venture into the city. I think it had been probably over a year since I was last in D.C.

This past weekend, we had a chance to play tourists and go on a scavenger hunt around Washington, D.C., using Urban Adventure Quest. They offer fun scavenger hunt adventures that you can complete with your family and/or friends.  Guided from any smartphone, teams make their way among well known and overlooked gems of the city, solving clues and completing challenges while learning local history. You can play anytime during daylight hours and start when you want and play at your pace. They have 54 Quests to choose from in many major cities.

My husband and I thought it would be easier to maneuver around downtown without our youngest two kids, so we had planned to drop them off at my in-laws'. But, when we got to my in-laws' house, my oldest daughter decided she didn't want to go either. So, it ended up being just me, my husband and our ten-year-old son. When you purchase a Quest, you're asked to give a Team name. My son had named us Captain Crunch, so I was glad that he still wanted to go.

The Washington, D.C. Quest begins at the Smithsonian Metro and ends at the Ford's Theater. It takes an estimated 3 to 3.5 hours to complete and there are 18 challenge questions. Though, because we chose to drive to D.C., as opposed to taking the Metro, our first challenge was finding parking.

After circling around for a bit, looking for street parking, we ended up parking at a garage at the Ronald Reagan Building. It was an interesting place to park because the security guard had to search our minivan before we were even allowed to enter the garage.

The first challenge had us heading over to the Smithsonian Castle. Most of the challenges didn't require you actually entering any of the museums to complete the question, which was good, because we chose a really crowded day to go! Lines to enter some of the museums were insane and the 90+ degree weather didn't help.

For the first challenge, we had to visit the Enid A. Haupt Garden, which was located behind the Smithsonian Castle. I had never been back there, so it was nice to get a chance to see it. Though, my husband didn't really want to linger. Once he found the answer, he was ready to move on to the next challenge! 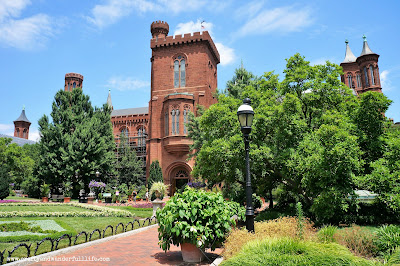 We had to count the number of birds that were found on the statue. 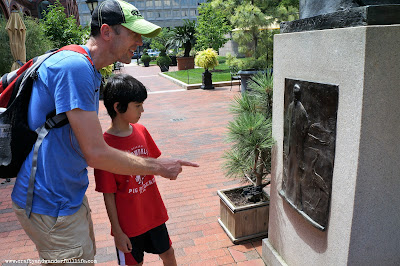 The next challenge had us visiting the Hirshhorn Museum. I hadn't visited in years, though I remember it being one of my favorite ones to visit. I had wanted to visit earlier this year, when the Infinity Mirrors exhibit was there, but we just never got around to going. For this challenge, we had to locate the sculpture in front of the museum and count some things on it. 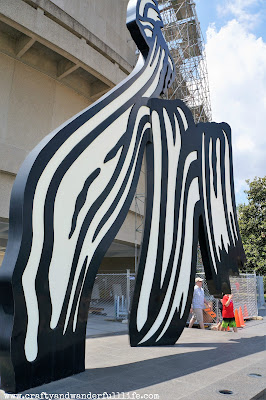 Some of the challenges were simple. Others like the next one were a little more involved. 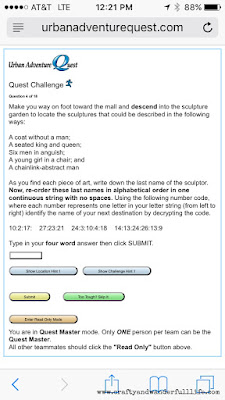 Though, we didn't have to figure out the entire answer. Once we got the first two letters of the first word, we figured out where we were headed next.

At this point, we decided to take a break. We were getting hungry and it was really hot out. The instructions given prior to the Quest stressed wearing comfortable shoes and making sure you have sunscreen on. We didn't follow those recommendations. My son got a blister from his flip flops and all the walking made my legs cramp up at the end. Plus, my shoulders got sunburned!

There was a Circus Arts demonstration going on on the National Mall, as part of the Smithsonian Folklife Festival. So we bought some lunch at one of the vendors and watched some of the performances. It was pretty interesting and my son expressed interest in doing what they were doing. 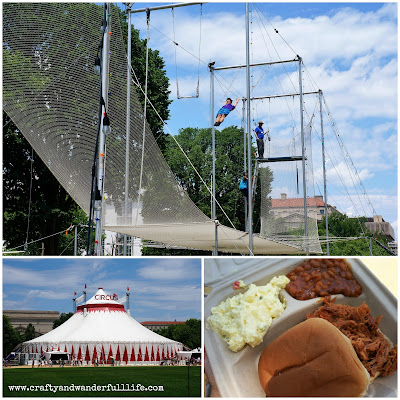 The next few challenges were at the Air & Space Museum. My husband ended up going on his own, while my son and I took another break and drank some pink lemonade. One of the challenges was kind of hard. It took us several tries to get the right answer.

It had been several years since our last visit to the Air & Space Museum and I had never seen it with a line this long! As cool as the museum is, I don't think I'd want to wait that long to get in.

Next, we headed to the American Indian Museum. This was another place I had never been before. I think if we had had more time and it wasn't so crowded, we would have gone in to look around. One of the challenges even had you going into the museum to find a particular exhibit. But, because it was apparently under renovation, Urban Adventure Quest provided the answers we needed to help complete the challenge, which revealed the next location, which was the Botanic Garden. 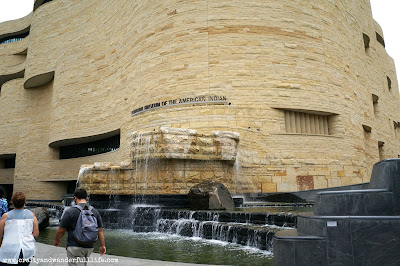 As we walked to the Botanic Garden, we stopped to get my son an ice cream bar.

At the Botanic Garden, we had to find the Rose Garden and answer a question. While at the Garden, my son's ice cream bar fell off the stick. He was upset. 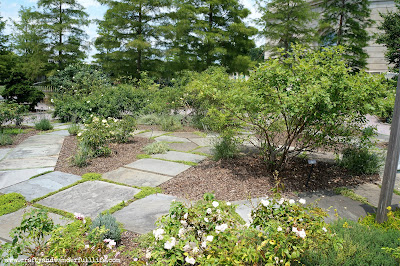 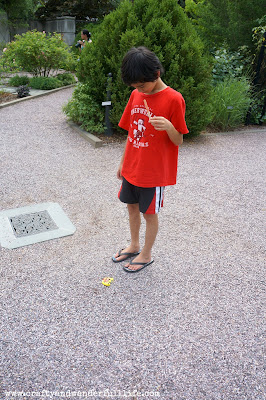 The next challenge was hard for us to complete. It had us find a statue in front of the Capitol Building and climb up on a bench so we could look through a triangle made by pieces of the statue. Unfortunately, the whole area was blocked off as the city prepared for the Capitol Fourth show. So, we couldn't do it. Instead we used the hints provided and eventually figured out we needed to name the statue that was on top of the Capitol Building. 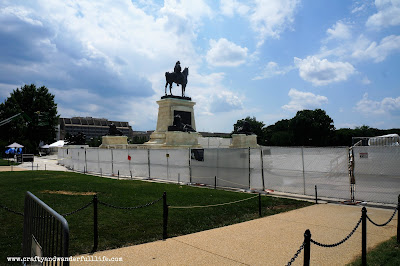 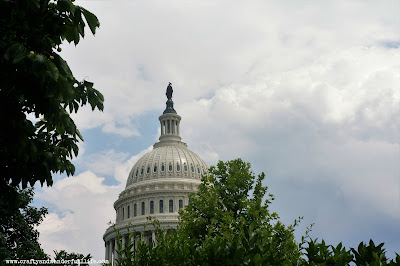 The next challenge had us heading to the Newseum. We had no idea how to get there, so we ended up using our phone to get walking directions. 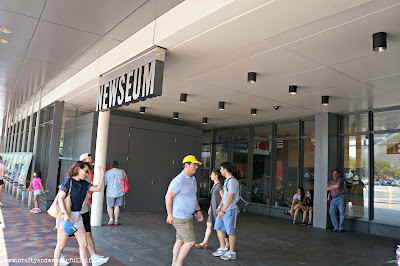 In between some of the challenges, there were historical tidbits and suggestions of different sights to check out while at each location. There were also bonus questions to help you earn more points and be higher on the Leaderboard for each city.

After the Newseum, we were onto the Downtown Heritage Trail, which highlights important D.C. sites during the Civil War. 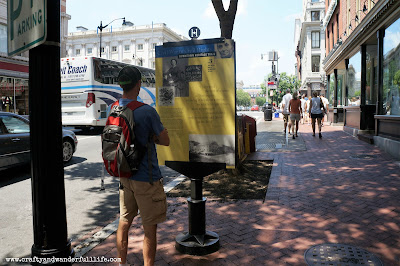 By this time, we were getting pretty tired and walking farther and farther away from where we parked the car. We misread the next challenge, which had us looking for the International Spy Museum. Instead, we ended up walking past our turn and into Chinatown, where the neighborhood changes pretty markedly. I even had a guy yell out to me, as I was walking looking at my phone, to not drop my phone because he wouldn't be able to call me later! 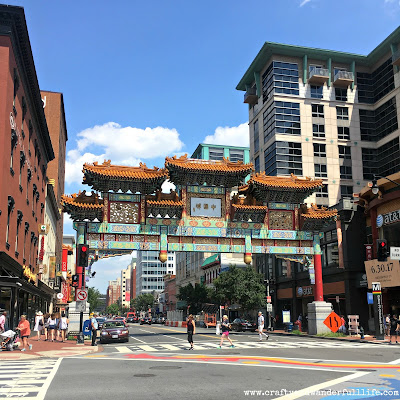 After walking a few blocks in Chinatown, we realized we must have made a wrong turn and mapped out where the International Spy Museum was. 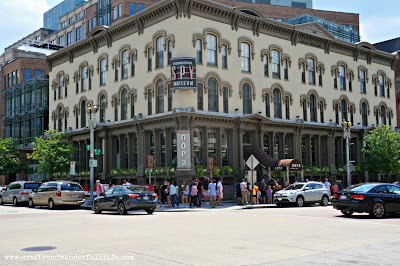 The challenge was here was kind of complicated, but it revealed the final location: Ford's Theater. On the way there, there was a Bonus Question about the Masonic Temple, which we got wrong. 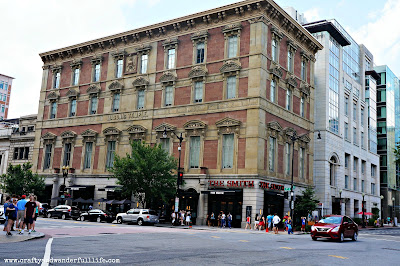 At Ford's Theater, we had a challenge and bonus question to answer. We couldn't find exactly what we were supposed to be looking for in the Gift Shop, but eventually just figured out the right answer. 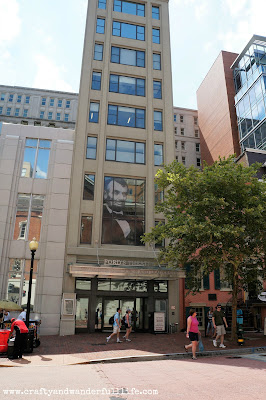 It took us almost three and a half hours to complete the Quest. Overall, it was a lot of fun. It was a lot more walking than I was expecting. But, I think it would be fun to do again with a group of friends. Maybe grab dinner and drinks after to celebrate finishing! 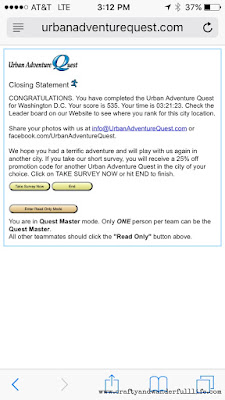 Interested in going on an Urban Adventure Quest for yourself?

Save 20% and pay only $39.20 for a team of 2-5 people! Use Promotion Code: FGBLOG. Sign up online at www.UrbanAdventureQuest.com.

If you do go on an Urban Adventure Quest, I'd love to hear about it!

Proud Member of The US Family Guide Network